You are here: Home / Archives for Chicago White Sox

with Packer Dave, Steve Leventhal, and John Poulter The guys are back to discuss the Toronto Raptors' first ever NBA Championship, the St. Louis Blues and their seven-game Stanley Cup win over Boston, as well as talk of the Chicago Bears and Green Bay Packers offseason football. John also gives his thoughts on the Major League Baseball season. Lastly, Jeff Rich joins us to … END_OF_DOCUMENT_TOKEN_TO_BE_REPLACED

with Packer Dave and Steve Leventhal Joining us this month are Dionne Miller of ABC7 Chicago, just back from Arizona, to talk Spring Training and a some Bears football. Jeff Rich chimes in on NBA hoops, and Adam Lucas, UNC beat writer from GoHeels.com previews the Duke-Carolina game and the ACC Tournament for us. Don't miss cameos from Pat Hughes and Bill Raftery. … END_OF_DOCUMENT_TOKEN_TO_BE_REPLACED 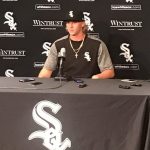 Michael Kopech's MLB debut had long been anticipated, and the young flamethrower did not disappoint when the lights, pressure and rain fell upon him at Guaranteed Rate Field Tuesday night. It's long been known that the trade of Chris Sale to the Boston Red Sox marked a new chapter in the Chicago White Sox' storied history: No longer would they try to tread water with talent … END_OF_DOCUMENT_TOKEN_TO_BE_REPLACED 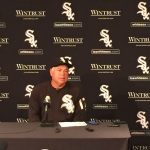 The White Sox have been trending up, having gone 5-5 in their last ten games entering Tuesday night. While that record over ten games isn't necessarily "trending up" for the contenders in Major League Baseball, it's a good start for the rebuilding White Sox, who entered Tuesday with a 22-42 record. The Sox have been playing good baseball against good teams, winning a three-game … END_OF_DOCUMENT_TOKEN_TO_BE_REPLACED

Things haven't been easy for the 2018 Chicago White Sox. Such should be expected for a team in the rebuilding position they are in, but the likes of Wellington Castillo and Avisail Garcia, while possibly not in their long-term plans, were expected to be reliable, veteran presences on a very young team. García has not played since April and Castillo will be suspended until late … END_OF_DOCUMENT_TOKEN_TO_BE_REPLACED