You are here: Home / Archives for Christian Jones 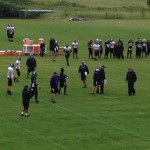 Two of the worst possible nightmares to occur for the Northwestern offense happened on the same day. A week after announcing he was going to be suspended for the first two games of the 2014 season, Northwestern running back Venric Mark announced he intends to transfer schools. And wide receiver Christian Jones is lost for the season after suffering a knee injury in … END_OF_DOCUMENT_TOKEN_TO_BE_REPLACED