You are here: Home / Archives for Dr. Hook 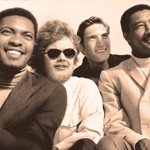 1967, Otis Redding, Eddie Floyd, Carla Thomas, Sam & Dave and Booker T and The MG's appeared at London's Finsbury Park Astoria on the first night of a 17-date UK tour. 1967, Working at Abbey Road studios in London, The Beatles finished the recoding of "She's Leaving Home" after adding backing vocals to the track. Harpist Sheila Bromberg who was part of the string section … END_OF_DOCUMENT_TOKEN_TO_BE_REPLACED