You are here: Home / Archives for JimiHendrix 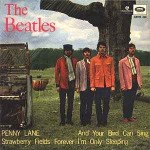 1966, The Jimi Hendrix Experience made their debut on the UK TV show Top Of The Pops performing "Hey Joe." 1966, Working at Abbey Road studios, London, Paul McCartney began work on his new song "Penny Lane," recording six takes on the piano, then added a second piano, put through a Vox amplifier with vibrato and reverb to create various percussion effects. Penny Lane is a … END_OF_DOCUMENT_TOKEN_TO_BE_REPLACED