You are here: Home / Archives for Kansas City Chiefs

with Packer Dave, Steve Leventhal, and John Poulter On the Sports Report this week, Dave and Steve discuss the hiring of a new Green Bay Packers coach, and the surprising end of the Chicago Bears season. Plus, we preview the NFC and AFC Divisional games this weekend. In the second segment, John joins us to talk NHL hockey and English Premier League soccer. Hear … END_OF_DOCUMENT_TOKEN_TO_BE_REPLACED

on the Weekend Sports Report with Packer Dave and Steve Leventhal We are joined by Bob Stevens, CBS radio correspondent and reporter for 105.3 The Fan in Dallas to preview the Packers-Cowboys Divisional Playoff game. Green Bay will be missing WR Jordy Nelson, while Dallas will be a full strength for this rematch of their October 16th game at Lambeau.  Jeff Rich and Dave … END_OF_DOCUMENT_TOKEN_TO_BE_REPLACED

on the Weekend Sports Report with Packer Dave and Steve Leventhal ...Dave has updates on free agency involving the Green Bay Packers and Chicago Bears. Greg Echlin from KCUR-FM in Kansas City has a Chiefs update, and discusses the Villanova - Oklahoma game in the Final Four.  SRN Assistant Sports Director Phil Meyers gives us a preview of the other half of the bracket - … END_OF_DOCUMENT_TOKEN_TO_BE_REPLACED

on the Weekend Sports Report with Packer Dave and Steve Leventhal ... The baseball playoffs begin and we give you a 2015 Division Series preview with John Poulter. It's also week five of the NFL season and Dave and Jeff Rich look at the key games.  Plus Green Bay Packers - St. Louis Rams and Chicago Bears - Kansas City Chiefs previews.  Steve goes one on one with Bears kicker … END_OF_DOCUMENT_TOKEN_TO_BE_REPLACED 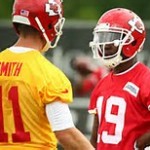 Week 4 had Jay Cutler turning from villain to hero within a 5 minute span as he threw a late pick in the 4th quarter to set up Raiders kicker Sebastian Janikowski for the go ahead field goal from 41 yards out. The Cutler of years past would have pouted his way to the locker room after the Bears offense stalled trying to score during their 2-minute drill following the turnover. … END_OF_DOCUMENT_TOKEN_TO_BE_REPLACED