You are here: Home / Archives for Memphis Grizzlies 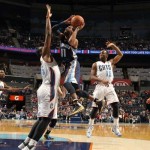 When Marc Gasol sprained his MCL on November 22, it seemed as if the Memphis Grizzlies season was over. Not only was Memphis going to be without their second best offensive option, but they would be missing one of the best low-post defenders in the NBA. Yet, despite playing in an ultra-competitive Western Conference, the Griz were able to tread water during Gasol's nearly eight … END_OF_DOCUMENT_TOKEN_TO_BE_REPLACED

Nolan Block and I continue on our quest to unveil each NBA team's New Year's Resolution. In Part 1, we looked at the underwhelming Eastern Conference. Part 2 looks into the Western Conference from bottom to top. Utah Jazz- Acquire a Franchise Player Nolan- On paper, the Utah Jazz are not the worst team in the league. They have assembled a team that looks like they are … END_OF_DOCUMENT_TOKEN_TO_BE_REPLACED