You are here: Home / Archives for NFL

The Chicago Bears took care of business in Buffalo on Sunday, dismantling the Bills en route to a 41-9 victory. The defense shined and the Bears piled on the points against an inferior Bills team. That put the team in good position for their upcoming slate of division opponents. Special defensive performance To say the Bills' offense has struggled this season would be an … END_OF_DOCUMENT_TOKEN_TO_BE_REPLACED 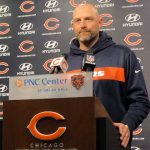 The Chicago Bears will travel to Buffalo to play the Bills for the first time since 2010 this Sunday, and with them, they bring the hopes of extending their NFC North lead. Taking care of business The Bills' offense has been abysmal this season. They sit squarely at the bottom of the NFL in passing offense and passing touchdowns and they are 30th in total offense. They have … END_OF_DOCUMENT_TOKEN_TO_BE_REPLACED 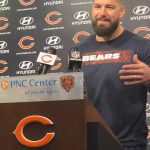 It's hard to believe that Zach Miller, former high school star quarterback from Nebraska, is a year removed from a horrific on field accident, that nearly cost him his leg, let alone his football career. Based on his cheery disposition and his incredible positive attitude, it's to believe Miller has endured multiple operations. At the same time the Chicago Bears franchise … END_OF_DOCUMENT_TOKEN_TO_BE_REPLACED

The Chicago Bears ended their two-game skid by defeating the New York Jets Sunday. Following an up-and-down offensive first half, the Bears pulled away in the second half to defeat the Jets 24-10. It wasn't always pretty, but this still-developing team did its job in defeating an inferior opponent. No Mack, no problem Football is a weird sport and Sunday was no exception. The … END_OF_DOCUMENT_TOKEN_TO_BE_REPLACED

The Chicago Bears will face the New York Jets this Sunday, as they try to right the ship of their previous two losses. Their rookie quarterback and exploitable matchups make the Jets  a beatable team. Reviving the pass rush The Bears' lack of pass rush was noticeable last Sunday, but it was largely by design. Khalil Mack dropped into coverage eighteen times and rushed Tom … END_OF_DOCUMENT_TOKEN_TO_BE_REPLACED