You are here: Home / Archives for NRBQ 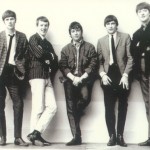 1964, The Animals continued to top the UK singles charts  with "The House Of The Rising Sun." Recorded in one take, this was the first number one to have a playing time of more than four minutes. 1964, The Supremes record "Come See About Me," which later goes to number one. 1965, Paul McCartney was presented with five Ivor Novello Awards at a lunch party at The Savoy, … END_OF_DOCUMENT_TOKEN_TO_BE_REPLACED