You are here: Home / Archives for Rick Danko 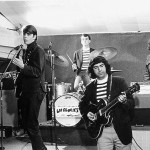 1965, A San Francisco band formerly known as The Warlocks performed for the first time under their new name, The Grateful Dead. 1966, The Beach Boys went to number one on the singles chart with "Good Vibrations," the group's third number one. As a child, Brian Wilson’s mother told him that dogs could pick up "vibrations" from people, so that the dog would bark at "bad … END_OF_DOCUMENT_TOKEN_TO_BE_REPLACED