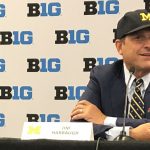 The Big Ten Football Media Days in Chicago kicked off the grind of the college football season, a chance for players and coaches to reflect on “what could be,” in the final days of the offseason. While the football season doesn’t officially kick off until the end of August, this is where players start to finish up their offseason training and coaches get closer to naming their … END_OF_DOCUMENT_TOKEN_TO_BE_REPLACED 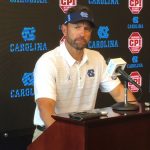 When UNC head coach, Larry Fedora stepped to the press room microphone following his team's 47-35 home loss to #16 Louisville on Saturday, it was clear he was frustrated with the game's outcome. "It's discouraging," Fedora said. "That's not the way we wanted to open conference play. We didn't do enough on offense to win the football game, and we didn't do enough on defense … END_OF_DOCUMENT_TOKEN_TO_BE_REPLACED

It has been quite the magical season for the Northwestern Wildcats, the only team in a power conference to never make the NCAA Tournament. That run might finally end with the help of a 68-55 win over Indiana at Welsh-Ryan Arena. In a crowd that had quite the large amount of red to go along with purple at the arena, the Indiana fans went home disappointed as the Hoosiers shot … END_OF_DOCUMENT_TOKEN_TO_BE_REPLACED

Friday night’s game between the New York Knicks and the Chicago Bulls was still very much in the shadow of Wednesday night’s World Series victory by the Cubs. Two days later, the championship is still inducing goosebumps and attracting literal millions to the streets of Chicago. The fans who made the trek to the United Center after 48-hours of Cubs pandemonium got to see a … END_OF_DOCUMENT_TOKEN_TO_BE_REPLACED

Being a Chicago Bulls fan in 2016 is probably a confusing feeling. It seems like just a season or two ago that Derrick Rose, the Prodigal Son of Chicago, was leading a gritty, defensive beast of a team straight towards a maybe mortal LeBron James. Then we all know what happened with Rose’s health, and the team understandably fell out of contention in his absence. But even as … END_OF_DOCUMENT_TOKEN_TO_BE_REPLACED