You are here: Home / Entertainment / Movie Review – Snow White and the Huntsman 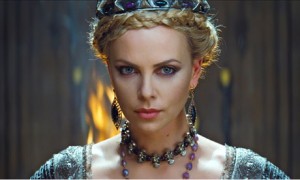 The latest version of Snow White is unlike any version you’ve ever seen before. In other words, this isn’t your Grandparents’ Snow White.

The recent release is titled “Snow White And The Huntsman,” and it appears to be a combination of “Lord Of The Rings” and “Braveheart.”

Most everyone knows the story of Snow White, who was the beautiful princess that was kept from her kingdom by her evil Step Mother, the Queen. That Queen in this movie is played by the ever beautiful Charlize Theron, who honestly is the best thing going on the screen. Theron is an award-winning actress who makes the most out of an updated dopey plot. Theron needs to have Snow White’s heart to stay perpetually young and beautiful, something Theron might be doing in real life (kidding).

The lead of Snow White is played by the unlikely casting of Kristen Stewart and every time you see her on camera you think of her in the “Twilight” trilogy. 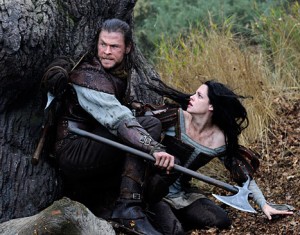 Initially, Stewart plays Snow white as a soft and kind caring Princess, but by the end of the movie she is like a combination of G.I. Jane and Lara Croft. If you want to accept that Stewart is believable as like an almost hard charging ninja, feel free but this was way too much for me to accept.

We haven’t even gotten to the “Huntsman” yet, played by Chris Hemsworth. The “Huntsman” is conned by the Queeen and her ugly evil brother to track down Snow White, but he back peddles on his gig in about five minutes, and for the rest of the movie he just fights trolls and makes goo goo eyes at Snow White.

This has been a big year for Hemsworth, who first played “Thor,” and then recreated the role in the “The Avengers.” But in this movie he pretty much mopes around and his failed attempt of an Irish accent comes across as pretty funny considering he’s from Australia.

There are tons of CGI special effects, and lo and behold the Seven Dwarfs multiply and become eight until the film makers probably realized their mistake and killed one of the little guys off. And not until I recognized one of the dwarfs did I realize that the joke was on me, because Ian McShane plays one of the dwarfs and he certainly is not. The producers couldn’t even do the right thing, and hire real life movie dwarfs (of which there are many) so they had real size people play the roles and then with the magic of technology just shrunk them down to size.

Too bad they couldn’t shrink the running time of 2 hours and 10 minutes which was about 30 minutes too long.

As always, the trailer had the meatiest parts of the movie which came off as a dark almost slasher flick at times. Like I said, this isn’t your Grandparents Snow White and it’s not for your kids either.

My rating: an RBI single – a star and a half for “Snow White And The Huntsman”