You are here: Home / Archives for Charlize Theron 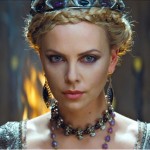 The latest version of Snow White is unlike any version you've ever seen before. In other words, this isn't your Grandparents' Snow White. The recent release is titled "Snow White And The Huntsman," and it appears to be a combination of "Lord Of The Rings" and "Braveheart." Most everyone knows the story of Snow White, who was the beautiful princess that was kept from her … END_OF_DOCUMENT_TOKEN_TO_BE_REPLACED

'Tis the season of all the major hyped movies. "Mission Impossible" with Tom Cruise and "Sherlock Holmes" with Robert Downey Jr and Jude Law (to name a couple,) will grab most of the headlines but neither will be nominated for anything. "Young Adult" on the other hand wont get much press but guaranteed that two of its actors will get nominations. Charlize Theron and Patton … END_OF_DOCUMENT_TOKEN_TO_BE_REPLACED