You are here: Home / Music / Be Bop / Song Of The Day by Eric Berman – “Salt Peanuts” by Dizzy Gillespie and his Orchestra 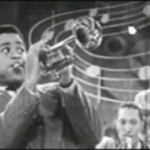 Like the Rock and Roll that sprang from its loins, a new form of off-the-chart mid-1940s Jazz called Be Bop captured the imagination of the youth of America and positively terrified its parents. Not only was the music primarily an African American form, but “hep” cats known as “Bird” (Charlie Parker) and “Diz” (Dizzy Gillespie) were at its forefront.

Gillespie is credited as the composer of this positively space-age tune, although the main riff can be traced back to the piano playing of Count Basie in 1941. This clip hails from the 1947 film Jivin’ In Be-Bop, a plotless musical film, that featured Gillespie’s Big Band playing eight songs including “One Bass Hit,” “A Night In Tunisia,” “Orthinology,” “Oop Bop Sh’Bam,” “He Beeped When He Should Have Bopped,” “Shaw Nuff,” “Grosvenor Square” and today’s Song of the Day by Eric Berman.

Members of the band include Ray Brown on bass, Milt Jackson on vibes and John Lewis on piano.

Jivin’ In Be-Bop – The Whole Film