You are here: Home / Music / Country / Song Of The Day by Eric Berman – “Delia’s Gone” by Johnny Cash 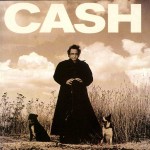 Stark, stately and positively harrowing is this murder ballad from Johnny Cash’s first Rick Rubin-produced “American Recordings” album from 1994. The song stems from the actual murder of Delia Green by Moses “Cooney” Houston which took place in Savannah, Georgia in 1900. Both the victim and the murderer were 14 years old and had been dating each other for a few months. One night Cooney was very drunk and began teasing Delia. Delia called Cooney a son of a bitch which held much wait back in those times and Cooney replied by pulling his gun out and shooting Delia. Cooney was sentenced to life in prison but served only twelve years before being pardoned in 1913. The song became a popular murder ballad first recorded by Blind Willie McTell where he blamed Delia’s demise on her flirting with gamblers. In subsequent recordings by Pete Seeger, The Kingston Trio, David Bromberg, Bob Dylan and Johnny Cash the facts become a little more distorted. This version has Cooney tying Delia up and shooting her point blank with his sub-machine gun.