You are here: Home / Music / Classic Rock / Song Of The Day by Eric Berman – “I Learned How To Pray” by Squeeze 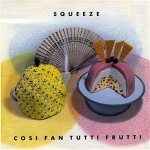 As was the case with Lennon and McCartney before them; the whole was way more than the sum of the parts with Glenn Tilbrook and Chris Difford. Together, the songwriting team behind the group Squeeze composed some of the greatest pop songs of the late ‘70s and 1980s: “Tempted,” “Pulling Mussels From A Shell,” “In Quintessence,” “Is That Love,” “Up The Junction,” “Another Nail In My Heart,” “Cool For Cats,” to name but a few… even though they didn’t place many of them up the charts. Apart, their solo recordings didn’t amount to much except to point out how much they needed each other’s input. After releasing several best-selling consecutive albums between 1979 and 1982, Difford and Tillbrook took three years off for solo projects before reuniting for the 1985 album “Cosi Fan Tutti Frutti.” The album was not well received and was ridiculed for it’s over the top production, and while the production hasn’t worn well with time, the songwriting is as sharp as it ever was especially on this song. They went on to release several more worthwhile records including “Babylon And On “ in 1987, “Frank” in 1989 and “Some Fantastic Place” in 1993 before they packed it in after “Domino” in 1998. They briefly reunited to re-record some of their best songs on the pleasant but unnecessary CD “Spot The Difference” in 2010. Word is that they will reunite for a brand new Squeeze album and tour next year.