You are here: Home / Archives for Blur 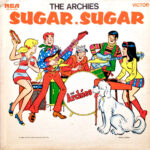 1967, a 16 date UK package tour with Jimi Hendrix, Pink Floyd, The Move, The Nice, and Amen Corner kicked off at the Royal Albert Hall, London. All acts played two shows per night. 1969, The Allman Brothers Band performed on the Boston Common in Boston, Massachusetts. 1969, "Sugar Sugar" by The Archies was at number one on the singles chart. The single became the longest … END_OF_DOCUMENT_TOKEN_TO_BE_REPLACED