You are here: Home / Archives for Creighton 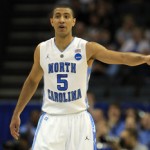 Call it sour grapes if you want, but a terrible injustice took place in Greensboro yesterday. Creighton players appeared to be using hard fouls as a defensive strategy in full view of a nationally televised audience. One replay captures a Bluejay player knocking down Carolina center Tyler Zeller. Early in the first half another player took a direct slap at  John Henson's … END_OF_DOCUMENT_TOKEN_TO_BE_REPLACED