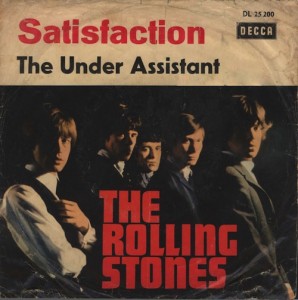 1965, The Rolling Stones started a four week run at number one on the US singles chart with “(I Can’t Get No) Satisfaction,” the group’s first chart-topper there. In the UK, the song was initially played only on pirate radio stations because its lyrics were considered too sexually suggestive.

1966, Johnny Tilotson, The Jive Five, The Tymes, The Shangra-Las and local band The Castiles (with Bruce Springsteen on vocals) all appeared at the Surf ‘n See Club in Seabright New Jersey.

1968, Eric Clapton announced that Cream would be splitting up following a farewell tour later in the year.

1968, The Nice were banned from appearing at London’s Royal Albert Hall after burning an American flag on stage. Two years later, Keith Emerson, leader of the Nice, joined Greg Lake and Carl Palmer in Emerson, Lake and Palmer.

1970, The Who single “Summertime Blues” backed with “Heaven and Hell” is released. The A-side comes from the album Live at Leeds while the B-side is a quickly recorded mono studio version of the Entwistle song done for the BBC, with a new vocal slapped on. It reaches number 38 in Britain and in the US, it makes number 27 in the Billboard charts.

1971, The Who performed during their “unpublicized” tour of the UK at Civic Hall, Dunstable, England.

1973, Led Zeppelin performed for two hours and forty minutes to 11,000 fans at the Milwaukee Arena in Milwaukee, Wisconsin.

1974, David Bowie played the first of five dates at The Tower Theatre in Philadelphia the recordings of which made up the David Live album released later that year.

1975, The Rolling Stones played at The Forum in Inglewood, California.

1976, One hit wonders Starland Vocal Band started a two week run at No.1 on the US singles chart with “Afternoon Delight.”

1978, Rolling Stone Bill Wyman was knocked unconscious after falling from the stage during a Stones concert at the Coliseum in St Paul, Minnesota.

1979, Chuck Berry was sentenced to five months in jail after being found guilty of tax evasion.

1980, Bob Marley and the Wailers began what would be Marley’s last ever UK tour when they appeared in Dublin, Ireland.

1981, The Grateful Dead played at the Civic Center in St. Paul, Minnesota.