You are here: Home / Archives for Los Angeles Dodgers 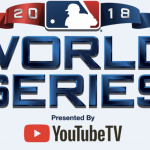 with Packer Dave, Steve Leventhal, and John Poulter On this edition of the Sports Report, John discusses Games One and Two of the 2018 World Series, and gives his thoughts on the start of the 2018 NHL season.  Our special guest, J.J. Stankevitz of CSNChicago.com talks Chicago Bears football, as does our long time friend of the show, Les Grobstein of WSCR radio 670. We preview … END_OF_DOCUMENT_TOKEN_TO_BE_REPLACED

on The Sports Report with Packer Dave Our special guest Cheryl Raye-Stout of NPR's WBEZ in Chicago talks Bears football. John Poulter joins us with a wrap up of the exciting 2017 World Series, his NHL update, and a look at Sunday's EPL matchups with Chelsea - Manchester United and Manchester City hosting Arsenal.  Steve Leventhal, Jeff Rich, and Dave discuss the Bears, the key … END_OF_DOCUMENT_TOKEN_TO_BE_REPLACED

with Packer Dave and Steve Leventhal Fresh from her Cubs postseason coverage, Dionne Miller of ABC 7 Chicago joins us to talk Chicago Bears and NFL football, including the ongoing Colin Kaepernick controversy. The Bears are surprising everyone with their tenacious defense en route to a 3-4 record. We'll talk about the other key games in the NFL this weekend, some top college … END_OF_DOCUMENT_TOKEN_TO_BE_REPLACED

with Packer Dave and Steve Leventhal Our 2017 baseball previews continue as John Polter talks Yankees, Dodgers, and the Texas Rangers.  He also chimes in on hockey and soccer news. Jeff Rich and Josh the intern talk NBA hoops. Lastly, Paul Banks from TheSportsBank.net and Steve discuss college basketball. Can Northwestern hang in down the stretch in the Big Ten? Will their … END_OF_DOCUMENT_TOKEN_TO_BE_REPLACED

You can usually pencil these Houston Astros, of the new American League variety, to finish dead-last or at least close to it, but these down years have potentially given them hope to build a solid core for the future. While you have to be an absolute seam-head to follow the MLB Draft in the present tense, looking at what Houston has done in the first round of the draft lately … END_OF_DOCUMENT_TOKEN_TO_BE_REPLACED