You are here: Home / Archives for Mark Farner 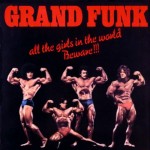 Song Of The Day by Eric Berman - "Bad Time" by Grand Funk Railroad This is not exactly the "Footstompin' Music" that Grand Funk Railroad were known for in the late '60s and early '70s. But once they lost the Railroad in their name and came under the aegis of Todd Rundgren and Jimmy Ienner, the hits started to come fast and furious including “We’re An American Band,” “The … END_OF_DOCUMENT_TOKEN_TO_BE_REPLACED