You are here: Home / Archives for Mission Of Burma

Mission of Burma came up in a late 1970s Boston independent music scene that really hadn't been developed yet and released a handful of singles. They really were ahead of their time as far as having no framework for record distribution, publicity and all of what goes with it for them to succeed. They were a four-piece band whose lead singer, Roger Miller, suffered from tinnitus … END_OF_DOCUMENT_TOKEN_TO_BE_REPLACED 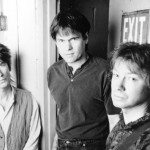 Review by Elliott Childs of Rokpool The more I hear the words post-punk used to describe bands and records, the more unsure I become of what the hell it actually means. I know that it technically means “after the punk movement” but that seems really bloody vague even for a musical genre. I've heard it used to describe hardcore punk, electro-rock, grunge and even acts that … END_OF_DOCUMENT_TOKEN_TO_BE_REPLACED