You are here: Home / Archives for Nitty Gritty Dirt Band – The End Of The World

Nitty Gritty Dirt Band - The End Of The World 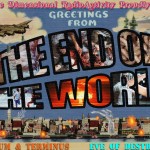 Some people are preparing for the end of the Mayan calendar, while others fear with trepidation the date will usher in the end of the world.  Here at The 3D RadioActivity research center, we have determined that if it is the end, we would not want to be left out, so we are going to cash in on it because this is yet another great idea for a show. Some New Age spiritualists … END_OF_DOCUMENT_TOKEN_TO_BE_REPLACED