You are here: Home / Archives for Randy Bachman 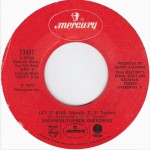 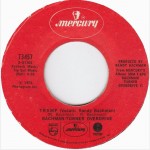 We’ve all been there and I still go there today from time-to-time.  Anybody who’s been to a concert with me can attest to this fact.  It ain’t pretty…but it’s the rock abandon that tracks like today’s jukebox classic, “Let It Ride” conjures that makes it all happen. Simply put, the track is the consummate air guitar song and one the band’s most riff-heavy moments.

Bachman-Turner Overdrive consisted of Randy Bachman on guitar and vocals, Robbie Bachman on drums, Tim Bachman on guitar and Fred Turner on bass and vocals.  During the 1970s, the band sold well over seven million albums while propelling hard rock nuggets like “You Ain’t Seen Nothing Yet,” “Takin’ Care Of Business,” “Hey You” and “Roll On Down The Highway” up the charts.

The group’s leader, Randy Bachman was a founding member of The Guess Who, who charted with such classics as “These Eyes,” “Laughing, “No Time,” “American Woman,” “Share the Land” and “Albert Flasher.” After his departure from The Guess Who, Bachman recorded a solo album called Axe and then formed the band Brave Belt with Guess Who vocalist Chad Allan. Brave Belt went on to release two albums before Allan left due to creative differences. Bachman brought Fred Turner and his two brothers Tim roulette and Robbie into the lineup forming Bachman-Turner Overdrive. When the band shopped around their debut record, they were turned away by 25 record labels before signing with Mercury Records in 1973.

Today’s jukebox classic was certainly not one of their biggest hits, but “Let It Ride” encapsulated all that was good about larger-than-life, radio-ready rock riffage of the mid-1970s. With its meat and potatoes guitar riff combined with totally relatable of-the-people, blue collar lyrics and Fred Turner’s gargled with nails vocals, the song stretched itself right down the center lane of the pop culture highway and onto the charts settling in at number 23 in 1974.

“Let It Ride” was written by Randy Bachman and Fred Turner while the band was on tour in their van. While driving, several truckers boxed the band’s van significantly slowing them down. The band followed the truckers to the next rest stop with the intent to tell them off, however upon catching a glimpse of how big they were, they decided to “Let It Ride.”

The band would have to wait for their next single, “Takin’ Care Of Business” (also from BTO II) to firmly establish themselves as top-tier hitmakers, but it was “Let It Ride” that set the groundwork for their enduring popularity.

Randy Bachman left BTO in 1977 and went on to from Ironhorse who recorded two albums that went nowhere. Bachman has since taken on reunion tours with The Guess Who and BTO. 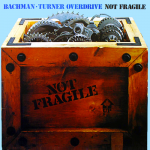 In 1971 the rock godz gave us Fragile by Yes…and three years later, they bestowed upon us the riff fest known as Not Fragile by BTO!

We’ve all been there and I still go there today from time-to-time.  Anybody who’s been to a concert with me can attest to this fact.  It ain’t pretty…but it’s the rock abandon that tracks like the title track to BTO’s Not Fragile (written by C.F. Turner) conjure that makes it all happen. Simply put, the track is the consummate air guitar song and probably the band’s most riff-heavy moment.

The Not Fragile album was BTO’s most popular (non-compilation) album, reaching number one on the LP charts in 1974. The record was their first album with Blair Thornton on guitar, giving the album its twin lead guitar heaviosity, and it contained two of the group’s best-loved singles, the freewheelin’ “Roll On Down The Highway,” and today’s Song Of The Day, the chart-topping “You Ain’t Seen Nothing Yet.” The rest of the BTO line-up consisted of Randy and Robbie Bachman on guitar and drums respectively, plus C.F. Turner on bass.

And today’s Song Of The Day, and the group’s biggest hit ever wasn’t even intended for the album! “You Ain’t Seen Nothing Yet” was born out of a jam and originally recorded as a scratch track to get levels in the recording studio. Randy Bachman added the song’s signature stutter as a joke for his brother Gary who stuttered. When the band presented the album to Mercury Records for release, the suits didn’t hear a surefire hit single on it and asked Bachman if he had anything else. Bachman reluctantly dug up the scratch track and, of course, they loved it.

Even so, Bachman only agreed to add the song to the record if he could re-record the vocals without the stutter. Bachman: “I tried to sing it normal, but I sounded like Frank Sinatra. It didn’t fit.” Ultimately, it was the original stutter version that had all the magic, and that is what we hear on the album.

Bachman, however, didn’t want it released as a single and the band went with “Roll On Down The Highway” as the album’s first single which peaked at #14 on the U.S. singles charts. Meanwhile, radio DJs started playing “You Ain’t Seen Nothing Yet” as an album cut and it began to gain popularity. As a result, the song was finally released as a single and went on to sell over a million copies and top the charts.  It was, in fact, BTO’s only chart-topping U.S. hit.

The Who had already set the precedent for the use of stuttering on a rock record with their single “My Generation,” but The Who similarities didn’t end there. Many people believe that the chord progression of “You Ain’t Seen Nothing Yet” is indeed a rip of The Who’s “Baba O’Reilly.”

Meanwhile, stuttering has gone on to become a popular element in songs like “Bennie And The Jets” by Elton John, “Changes” by David Bowie, “Bad To The Bone” by George Thorogood & The Destroyers, “My Sharona” by The Knack, “Welcome To The Jungle” by Guns N Roses and “Check It Out” by The Beastie Boys, to name but a few. What other stutter songs can you name?

2020 and 2019: Thanks to everyone who continues to support us. The current licensing to legally play all the music you hear on Acid Flashback costs almost $2000 a year. Please help us defray this and other costs with a donation of any amount. … END_OF_DOCUMENT_TOKEN_TO_BE_REPLACED