You are here: Home / Archives for Rare Earth

1964, The Beatles scored their first number one album with Meet The Beatles! The album stayed at the top of the charts for eleven weeks. 1964, The Dave Clark Five appeared on the UK TV show Thank Your Lucky Stars. 1965, American singer and pianist Nat King Cole died of lung cancer. His first hit was the […] 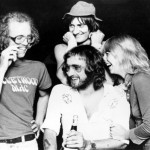 1971, Fleetwood Mac appeared at Up The Junction in Crewe, England. 1974, Peter Hoorelbeke, drummer with Rare Earth, was arrested after a concert for throwing his drumsticks into the crowd. 1975, Elvis Presley had a face-lift at Mid South hospital, Memphis. 1976, Abba gave a special live performance in Stockholm for Sweden’s King Carl XVI […]