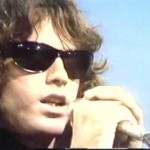 1967, The Doors appeared on The Jonathon Winters Show on CBS TV from Los Angeles. 1967,  Bob Dylan releases his long-awaited follow-up to the Blonde on Blonde album,  John Wesley Harding. Rolling Stone declares, “Without a doubt this is another major musical step for Bob Dylan. The predominance of country blues, white and black, from Hank Williams to Leadbelly is … END_OF_DOCUMENT_TOKEN_TO_BE_REPLACED

1963, James Carroll at WWDC in Washington, DC, became the first disc jockey to broadcast a Beatles record on American radio. Carroll played "I Want To Hold Your Hand," which he had obtained from his stewardess girlfriend, who brought the single back from the UK. Due to listener demand, the song was played daily, every hour. Since it hadn't been released yet in the States, … END_OF_DOCUMENT_TOKEN_TO_BE_REPLACED

1965, Released as a double A-side The Beatles "Day Tripper / We Can Work It Out," became their ninth UK number one, and their third Christmas chart topper in a row. The single was a US number one in January 1966. 1966, Pink Floyd appeared at a prohibition themed dance, the AA Students Christmas Carnival, held at The Architects Association, Bedford Square, London. 1966, The … END_OF_DOCUMENT_TOKEN_TO_BE_REPLACED

1967, Rolling Stones guitarist Brian Jones was rushed to St Georges hospital in London after collapsing. A doctor reported Jones was tired and suffering from over strain and was also recovering from having some teeth out. 1968, Deep Purple played at the Grande Ballroom in Detroit, Michigan. 1968, Marvin Gaye scored his first number one single when "I Heard It Through The … END_OF_DOCUMENT_TOKEN_TO_BE_REPLACED

1966, Pink Floyd make their first ever appearance at the Royal Albert Hall. Their would play the RAH three more times, with the last performance there in 1970. 1966, Jimi Hendrix performs at the RamJam Club in London. 1967, Rolling Stone Brian Jones was given 3 years probation and a £1,000 ($1,600) fine for drug offenses. Three psychiatrists agreed that Jones was an … END_OF_DOCUMENT_TOKEN_TO_BE_REPLACED