You are here: Home / Archives for The Limelighters 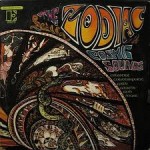 At any other time in music history, this record would have never happened. But the timing was right for Cosmic Sounds by The Zodiac in 1967, and Elektra Records boss, Jac Holzman, was just the man to make it happen.

The album cover promised “Celestial counterpoint with words and music,” and the resultant record delivered the sublime and the ridiculous, all in one place. But first a little background…

Holzman was basking in the glory of the success of The Doors’ debut album when he got the idea to create a record that would match the psychedelic music that was currently all the rage, with poetry a la Jim Morrison, and use the signs of the Zodiac to tie it all together.

Holzman contacted Alex Hassilev of the folk group, The Limeliters to produce the project, and Hassilev brought in Moog synthesizer pioneers Mort Garson (who was also his business partner) and Paul Beaver (later of Beaver and Krause) to create suitable music for the endeavor.

Bassist, Carole Kaye and drummer, Hal Blaine of the L.A. studio collective The Wrecking Crew, made up the rhythm section along with “exotic percussionist” Emil Richards who had previously worked with Frank Zappa. Rounding out the stellar cast of musicians was West Coast jazzman Bud Shank on the flute and Mike Melvoin on keyboards.

But the icing on the proverbial cake was the heavy-lidded narration written by Jaques Wilson, which was “expertly” recited by folk singer Cyrus Fayer. Each song on the twelve track album was inspired by one of the zodiac signs, although the dialog is pretty much interchangeable between all the tracks, and always unintentionally hilarious.

The album did next to no business when released back in 1967, but heard with today’s ears, it contains a fair amount of first-rate music, and of course, the giggle-inducing dialog makes this record one of the coolest period pieces from the psychedelic era.

Take heed of the recommendation on the back cover of this record: “Must Be Played In The Dark.”

2020 and 2019: Thanks to everyone who continues to support us. The current licensing to legally play all the music you hear on Acid Flashback costs almost $2000 a year. Please help us defray this and other costs with a donation of any amount. … END_OF_DOCUMENT_TOKEN_TO_BE_REPLACED