You are here: Home / Uncategorized / April Wine: “You Could Have Been A Lady” 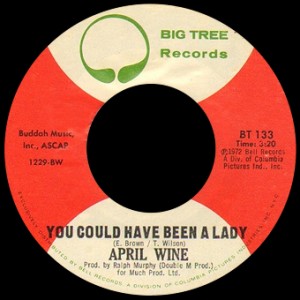 Greetings music lovers, and welcome to Halifax, Nova Scotia, Canada where we roll the clock back to 1972. Fresh off a Canadian hit single, “Fast Train”, from their eponymous first album, April Wine recorded their second album, On Record, and included a cover of this song by British band Hot Chocolate, who of course had world-wide success a couple of years later with the smash hit “You Sexy Thing”. While Hot Chocolate’s original of “You Could Have Been A Lady” featured a definite late-60s vibe, April Wine jacked up the tempo, played incredibly tight, and producer Ralph Murphy achieved a super-clean, in-your-face, leaps-out-of-the-speakers mix that still sounds fantastic today, some 40-plus years later. While the vocal breaks are somewhat cheesy, the remainder of the song sports a perfect balance between the lead and rhythm guitars that makes this long-time live sound tech drool.

The song gave the band their first exposure in the U.S., reaching #32 on the Hot 100, and staying on the charts for 11 weeks. In spite of this success, it would be another 7 years (an eternity in the music biz) before they charted in the U.S. again, with many radio listeners at the time thinking the single “Roller” and album First Glance were from a "new" Canadian band. The massive success of that single and album kicked off several years of hit albums and singles, and although some of those songs featured a 3-guitar attack, to this old rocker's ears, none of them can match the sheer energy and rock'n'roll vibe of this, their first American hit.