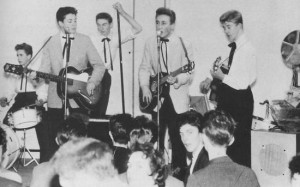 1957, John Lennon and Paul McCartney met for the first time at The Woolton Church Parish Fete where The Quarry Men were appearing. As The Quarry Men were setting up for their evening performance, McCartney eager to impress Lennon picked up a guitar and played “Twenty Flight Rock” by Eddie Cochran, and Gene Vincent’s “Be-Bop-A-Lula.” Lennon was impressed, and even more so when McCartney showed Lennon and Eric Griffiths how to tune their guitars, something they’d been paying someone else to do for them.

1964,The Beatles film A Hard Day’s Night premiered at The Pavilion in London. Filmed during the height of Beatlemania, and written by Alun Owen, the film was made in the style of a mockumentary, describing a couple of days in the lives of the group.

1966, The Rolling Stones play War Memorial Hall in Syracuse, New York. During the performance they allegedly desecrate the American flag by dragging it across the stage.

1967, Pink Floyd made their first appearance on BBC TV music show Top Of The Pops to promote their new single “See Emily Play.” This was the first of three times the song would be performed live on television. A badly damaged home video recording recovered by the British Film Institute of this show was given a public screening in London on 9th January 2010 at an event called “Missing Believed Wiped” devoted to recovered TV shows. It was the first time any footage was seen of the performance since its original broadcast.

1968, The Jeff Beck Group played at the Grande Ballroom in Detroit, Michigan 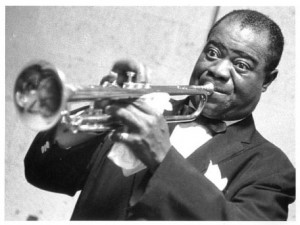 1971,  American jazz trumpeter, singer and bandleader, Louis Armstrong died. Had many hits including the 1964 US number one”Hello Dolly!,” 1968 UK number one “What A Wonderful World,”plus “When The Saints Go Marching In,” “Ain’t Misbehavin,” and “We Have All the Time in the World.”

1972, David Bowie appeared on the UK music show Top Of The Pops playing his new single “Starman,” found on the Ziggy Stardust album. It was his first hit since 1969’s ‘Space Oddity’ three years before. The single peaked at number ten and stayed on the charts for 11 weeks

1973, Queen released their debut single “Keep Yourself Alive” in the UK.

1974, The Hues Corporation went to number one on the singles chart with “Rock The Boat.”

1975, Rolling Stone Keith Richards was arrested by the highway patrol in Arkansas on charges of reckless driving and possessing an offensive weapon, a seven-inch hunting knife.

1979, American singer, producer songwriter, Van McCoy died from a heart attack in Englewood, New Jersey. Van McCoy and the Soul City had the US chart topping single “The Hustle.” McCoy worked with Gladys Knight and the Pips, The Stylistics, Aretha Franklin and David Ruffin.

1984, The Grateful Dead perform at the Alpine Valley Music Theatre in East Troy, WI, outside Milwaukee.

1985, Phil Collins went to number one on the US singles chart with “Sussudio,” his third US chart topper, and a number twelve hit in the UK.

1996, “Three Lions,” the official song of The England Football team, by comedians Baddiel and Skinner and The Lightning Seeds was at number one on the UK singles chart.

2002, George Harrison’s widow Olivia put the couple’s home up for sale for £20m ($35 million) saying she couldn’t bear to live with the memories of the attack by schizophrenic Michael Abram, who broke into the house in 1999.

2003, Skip Battin bassist and songwriter with The Byrds died of complications from Alzheimer’s disease. He also played with New Riders Of The Purple Sage and The Flying Burrito Brothers.

2004, On the 40th anniversary of the world premiere of The Beatles film A Hard Day’s Night, a private reunion of the cast and crew was hosted in London by DVD producer Martin Lewis. The screening was attended by Paul McCartney actors Victor Spinetti (the television director), John Junkin (the band’s road manager), David Janson (the small boy met by Ringo on his “walkabout”) and many of the crew members