You are here: Home / Archives for Alison Moran 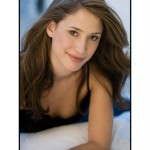 "As most of you know by now, I had a slip-up last week on the air while covering the Blackhawks playoff series. As a result of the attention it received, an old web-based sports comedy series I participated in several years ago came to light. The intention of that show was to present a satirical, tongue-in-cheek approach to sports but, unfortunately, some of the … END_OF_DOCUMENT_TOKEN_TO_BE_REPLACED 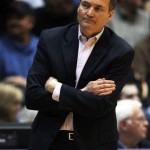 (Evanston, IL) A school record four consecutive postseason appearances in the NIT.  189 victories in 13 years, or 14.50 per season, the second-most in school history. Two All-Big 10 players in John Shurna and Drew Crawford. Sounds okay for a Big 10 coach, maybe? Especially at a school more revered for academics than athletics for more decades than the coach has been … END_OF_DOCUMENT_TOKEN_TO_BE_REPLACED

(Evanston) It was a tough, tough night for the Northwestern Wildcats as the sloppy game got physical, as shots didn't fall, and ultimately, a 75-64 loss to the Butler Bulldogs, two years removed from their trip to the Big Dance in Houston. A victory on Saturday would have given the Cats at least eight wins through their first 10 games for the fifth consecutive season. But … END_OF_DOCUMENT_TOKEN_TO_BE_REPLACED 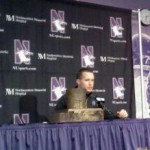 Northwestern University's Wildcats are bound for Jacksonville, Florida for the 2013 Taxslayer.com Gator Bowl.  The coveted Bowl Trophy, which Northwestern hasn't won in eons, would be the second trophy the Wildcats have won this season. How lucky can they get this season? Already, they are the bearers of the Land of Lincoln Trophy, won in a game against a … END_OF_DOCUMENT_TOKEN_TO_BE_REPLACED 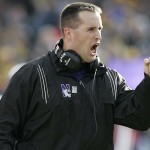 (Evanston, IL)  Northwestern Football Coach Pat Fitzgerald is cautiously optimistic optimistic as his Wildcats completed the nonconference portion of their schedule a perfect 4-0, including a 38-7 win over the MAC conference' South Dakota Coyotes on Saturday. Previously, Northwestern had beaten Vanderbilt, Syracuse, and Boston College.  The Wildcats' 31-point margin of … END_OF_DOCUMENT_TOKEN_TO_BE_REPLACED