The 2018 Chicago Bears came to San Francisco with little on the line and still escaped with a victory over the 49ers. Chicago now comes to Minnesota to face the Vikings, struggling for their playoff lives, with the two seed still in play. It may not have always been pretty. Poor execution hit the Bears a few times, including an early turnover on Mitch Trubisky's lateral to … END_OF_DOCUMENT_TOKEN_TO_BE_REPLACED

The newly crowned 2018 NFC North Champion Chicago Bears will be in San Francisco this week to face the 49ers. The 49ers carry with them unfamiliar momentum, having won their past two games. The Bears will play for seeding this week, with a first-round bye still very much in play after the Rams loss to the Eagles. A win over the 49ers could end up as the deciding factor between … END_OF_DOCUMENT_TOKEN_TO_BE_REPLACED 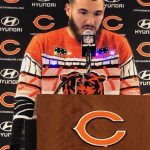 The 2018 Chicago Bears exorcized their demons with a win over the Green Bay Packers on Sunday, giving them their first win over the Packers in five games and, more importantly, their first division win since 2010. Bounce-back game from Trubisky Bears quarterback Mitch Trubisky had arguably the worst game of his career against the Rams a week ago. A week of criticism … END_OF_DOCUMENT_TOKEN_TO_BE_REPLACED

The 2018 Chicago Bears face the Green Bay Packers on Sunday for the second time this year, but this time, a lot more than pride is on the line. A Bears a win clinches the NFC North and, combined with a Vikings win, would eliminate the Packers from postseason contention. A chance for the run game The Packers enter Sunday with the 29th ranked run defense by … END_OF_DOCUMENT_TOKEN_TO_BE_REPLACED

The 2018 Chicago Bears made a statement against the Los Angeles Rams. A game many picked to be another victory, the Bears' defense showed out and put a boot on a prolific Rams' offense. Stopping the Rams' offense starts with Gurley The modern NFL offense revolves purely around the quarterback. While the Rams have a top-10 quarterback in Jared Goff, running back Todd … END_OF_DOCUMENT_TOKEN_TO_BE_REPLACED