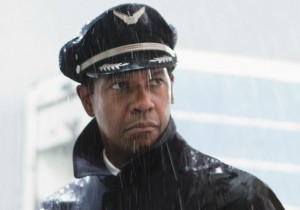 We’re getting near the end of the calendar, and that means we’re getting some of the better movies of the year. Very recently “Argo” came out and undoubtedly will be nominated in the Best Picture category. And now you can add “Flight” to that same list.

I’m sure you’ve all seen the incredible trailers for “Flight” where a plane flying upside down is about to crash but this movie is so much more then horror up in the sky.

Denzel Washington (great yet again) plays a veteran pilot who loves to fly in more ways then one. Yes he’s as deft in the air as he is walking on the ground. But he also likes to partake in almost anything that will get him buzzed. Booze of all sorts and cocaine are his favorites and some how he is able to function in spite of his body almost drowning in drugs.

On a short flight from Orlando to Atlanta, Washington must maneuver his plane off the ground and through a terrible storm. He is able to do this with a modicum of ease but then a short time later the plane encounters a terrible mechanical defect and goes into a terrifying dive.

Washington showing almost no emotion then goes completely against the manual and brings the plane out of it’s dive by flying it upside down (not even sure if this is possible) before gliding it into a grassy field where it crashes killing just 6 of the 102 people aboard.

Initially Washington is hailed a hero but he knows that he accomplished all this while legally drunk and with coke in his system. The National Transportation Safety Board also knows this and they go about trying to discredit him. 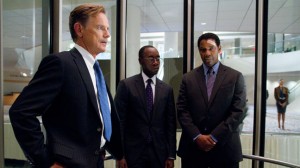 Enter Don Cheadle (love his work) as a sharp attorney, who plots to throw the drug results out thus clearing Washington. And for the longest of times it looks like just that will happen. But Washington has his demons to overcome and it’s a race to see if he is cleared of charges or whether his conscience finally catches up to him.

“Flight” deals with alcoholism in a way that reminded me of an old movie, “Days Of Wine And Roses.” In that flick Jack Lemmon and Lee Remick battle the disease with only one conquering it while the other succumbs. You wonder to the very end which direction Washington will go before the moment of truth in the climatic ending scene.

Washington is such a versatile actor whether he plays a good guy, a bad guy, a sympathetic figure or a complex hurting character as he is in this movie.

Besides Cheadle, other wonderful supporting performances are turned in by John Goodman (also terrific in “Argo,”) Bruce Greenwood, and Kelly Reilly.

The ending is ever so slightly predictable but even that didn’t bother me as I thoroughly enjoyed this movie throughout and rate it a grand slam – four stars.