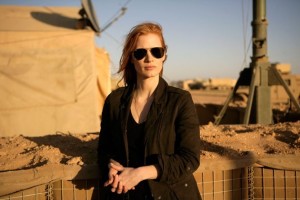 It’s interesting that the two movies that will likely duke it out for Best Picture at the Academy Awards are both epic films on different parts of our nation’s history. “Lincoln” covers the final days of our 16th President as the Civil War came to an end and along with it,  the abolishment of slavery. And now comes “Zero Dark Thirty” with the title describing when Osama Bin Laden was finally eliminated.

“Zero Dark Thirty” is an important film that all American’s should see. And it goes into incredible detail of not only the raid on Bin Laden’s compound but also the meticulous work over 10 years leading up to the raid.
The main character in the film is Jessica Chastain who plays a C.I.A. operative hell bent on figuring out the puzzle of just where Bin Laden is hiding. We’re not really sure if Chastain’s character is based on a real life agent but if it is then this nation owes that person an incredible debt of gratitude. Her dogged pursuit is evident through out as she has to over come, at times, her less then skilled cohorts.
Besides the final scene,  which seems to correspond to all accounts of how the Seal Six team eluded the Pakistani forces and killed Bin Laden, we also get numerous graphic scenes of torture of prisoners. Some critics and other organizations took umbrage to these scenes but I didn’t think they were so bad and have seen worse in numerous other flicks. 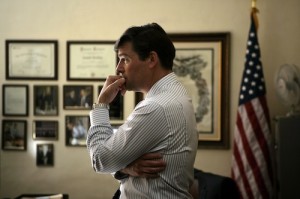 Other good performances were put in by Jason Clarke, Kyle Chandler and James Gandolfini and it’s good to see Gandolfini branching out and playing something other then an Italian mobster all the time.
As mentioned, “Zero Dark Thirty” will be in the final pair of movies for Best Picture and though I liked it a lot, there was something missing that had me saying to myself, “That’s the one.” I can’t say it was because of the length (2 hours 39 minutes) because “Lincoln” was equally as long. But beauty is in the eye of the beholder, and I still liked it a lot rating it a home run -three and a half stars, but I thought other movies were better and more enjoyable this year.