You are here: Home / Music / Classic Rock / Vinyl Schminyl Radio One Hit Wonder 1-3-13
No Tea Party today but we do have Tee Set..A One Hit Wonder from back in the day! Do you remember??? 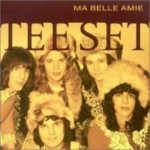 Tee Set was a pop rock band formed in 1966 in Delft, Netherlands. The group recorded a single in 1969 entitled “Ma Belle Amie“, which was a hit in their native country, selling over 100,000 copies.[1] The group released an album in the United States on Colossus Records in 1970 entitled Ma Belle Amie (the single of the same name listing the artist as ‘The Tee Set’), which reached #158 on the Billboard 200 chart,[2] just as the single took off in America, eventually reaching #5.[3] The single sold over one million copies, and was awarded a gold disc.[4] In the Netherlands, the next single “She Likes Weeds” attained #1 there. However, the track was banned in the U.S., because it was said to refer to using drugs. However, the title was taken from the film The Ipcress File. A follow-up single, “If You Do Believe in Love”, hit #81.[3] The group disbanded in 1975, but briefly reunited in 1979 and 1983.

Their former lead singer Peter Tetteroo died in September 2002 from liver cancer, at the age of 55.[5]