You are here: Home / Archives for Featured Celebrities 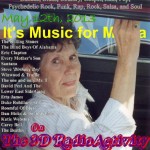 I'm Uncle Marty, this is The Award Winning 3D RadioActivity, and on this episode we are being award winning little helpers by playing melodies for Mom.   Mother's Day in the United States is an annual holiday celebrated on the second Sunday in May. It recognizes mothers, motherhood and maternal bonds in general, as well the positive contributions that they make to society. The … END_OF_DOCUMENT_TOKEN_TO_BE_REPLACED

On Saturday February 2 Bob Stern will be recording a Vinyl Schminyl Radio Hour Live At Madame Zuzu’s. Madame Zuzu’s is a 1930s style Chinese tea house owned by Billy Corgan which opened in September of 2012 at 582 Roger Williams in Highland Park, IL. The entire hour will be devoted to the music of Pink Floyd, tracing their roots from the Syd Barrett days starting with Piper At … END_OF_DOCUMENT_TOKEN_TO_BE_REPLACED