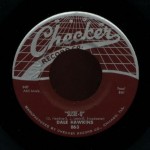 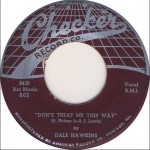 Today marks the beginning of a new semi-regular series for Song of the Day by Eric Berman. “The Jukebox Series” will focus on the 80 records that inhabit my 1963 Seeburg LPC1 jukebox. I’ve had the jukebox (or as I like to call it “the prehistoric iPod”) for a little almost 14 years and in that time I’ve perfected the mix of 45s within. (Well, at least I think so.)

Today, I will begin with “A-1” on the jukebox and systematically proceed through all of the records with a focus on why the tune is worthy of inclusion and how I got it.

I always thought that I’d have the Dave Edmunds single “A-1 On The Jukebox” in the “A1” position within my jukebox, but I don’t have a copy of the single, and as a rule don’t choose songs based on the novelty value of a visual pun that most people won’t see, so “A-1” in my juke box is Dale Hawkins’ swamp rock classic “Susie Q.”

I purchased an original Checker 45rpm pressing of the record at a garage sale several years ago for 10 cents and it was money very well spent. Sonically, it sounds killer pouring out of the vintage juke speakers.

Dale Hawkins wrote the song, although when it was released it was also credited to Stan Lewis who owned the record label and Eleanor Broadwater who was the wife of Nashville DJ Gene Nobles. Such was the way the music biz worked back in the 1950s, royalties had to be spread around if you wanted your record released and played on the radio.

Once the track was recorded, the master was licensed to Checker Records who released the single in 1957 where it climbed to #7 on the R&B charts and #27 on the pop charts. The guitarist on the track was a young 15 year old future Rock ‘n’ Roll Hall Of Famer James Burton, who went on to play with the likes of Ricky Nelson, Elvis Presley, Johnny Cash, John Denver, Glen Campbell, Gram Parsons, Jerry Lee Lewis, Elvis Costello, Roy Orbison, Joni Mitchell, Vince Gill and many others.

Over the years, the song has seen notable covers by The Rolling Stones, Creedence Clearwater Revival (who issued it at their debut single), Jose Feliciano, Suzie Quatro (a real Suzie Q), Lonnie Mack, The Crew-Cuts, Gene Vincent, Johnny Rivers, Quicksilver Messenger Service, The Everly Brothers, Linda McCartney (as Suzy and the Red Stripes), Bobby McFerrin and Flash Cadillac. None of the covers can even approach the greatness of the original, which is why it is included in my jukebox.

The flip is a sturdy rockabilly rave up which doesn’t get as much play time as it should; however when it does come up, it always sounds great.