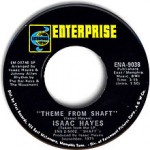 Call him “Shaft”…call him “Black Moses”…call him “Chef”…but one thing is for sure, he was responsible for some of the funkiest and smoothest hot-buttered soul ever committed to wax. Today’s Song Of The Day inhabits the E1/F1 position in my jukebox and it is Isaac Hayes’ first chart-topper from 1971. “Theme From Shaft” also won the Academy Award for best film score that year, making Hayes the first African American to win an Oscar in the composer category.

Hayes initially agreed to write the score for the Shaft film only if he was given the chance to try out for the lead role. And while he did have a bit part in the film as a bartender, he was never afforded the opportunity to audition for the lead. Fortunately he decided to fulfill the agreement anyway. When film director Gordon Parks approached Hayes about writing the score, he described the character of Shaft as a “black private dick who’s a sex machine to all the chicks” and Hayes picked the description up verbatim for the song.

“Theme From Shaft” was initially not intended to be released as a single, however once the soundtrack was released, the song received extensive club play where it gained popularity. Two months after the album’s release, the single came out and went on to be a great influence on 1970s disco. The song could have been credited to “Isaac Hayes & Dawn” as the background vocalist who says “Shut Your Mouth” was Telma Hopkins, who along with Joyce Vincent Wilson (the other background vocalist,) were both members of Tony Orlando’s backing group Dawn. The band backing Hayes on the track was The Bar-Kays.

In the days before sampling, the high-hat cymbal on the intro was picked up from an Otis Redding single that Hayes arranged: “Otis Redding’s ‘Try A Little Tenderness,’ I had a hand in arranging that. At the end, Al Jackson was doing some stuff on a hi-hat, and I thought if I sustained that kind of thing on a hi-hat, it would give a relentless, dramatic effect, and it worked.” (songfacts.com) The wah-wah guitar part played by Charlie Pitts was originally intended for an unfinished song hanging around the STAX vaults.

Hayes started out playing sax for The Mar-Keys before becoming the keyboard player for the STAX Records house band writing classic songs with his partner David Porter like “Soul Man,” “When Something Is Wrong With My Baby,” “Hold On, I’m Comin'” and “B-A-B-Y.” He also wrote the not-so-classic “Chocolate Salty Balls” for South Park where he provided the voice for the Chef character before falling out with Trey Parker and Matt Stone over the content of an episode that poked fun at Scientology.

Hayes’ brand of symphonic soul was perfect for love making, and numerous children were no doubt conceived to the strains of his extended recordings of “Walk On By,” “By The Time I Get To Phoenix” and “Never Can Say Goodbye,” from classic albums like Black Moses and Hot Buttered Soul.

The flip of the single is the breezy instrumental “Café Regio” which featured musical backing by members of STAX groups, The Bar-Kays and The Movement.