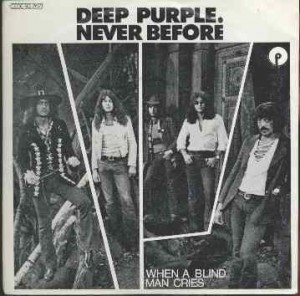 I first heard this song when I purchased, sometime in 1974, the compilation album “Deep Purple – Mark I & II”, which was released in December 1973, after Mark II singer Ian Gillan had left the band. Recorded during the Machine Head sessions, it was released as the B-side to the failed single “Never Before” from that album. Why it wasn’t included on the album is a mystery to your faithful scribe, as it is one of the finest songs Deep Purple ever recorded. This is Exhibit A as to why Deep Purple should have been inducted into the Rock’n’Roll Hall of Fame long before this year.

Rather than relying on their usual formula of guitarist Ritchie Blackmore and organist Jon Lord’s massive chops and J.S. Bach-influenced baroque flourishes (listen to “Burn” or “Highway Star”), this song sucks you in immediately with Gillan’s plaintive lament of the plight of the disabled, sung over Lord’s minimalist chordings and Blackmore’s wring-every-ounce-of-emotion-from-a-single-note, a la B.B. King, guitar licks. As far removed from “uplifting” as you can get, this is the blues in all its rawest, purest, and most gut-wrenching glory. Enjoy.