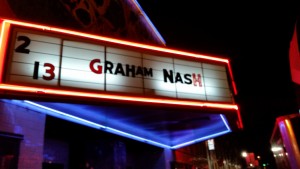 A couple of years ago I wrote a piece in this space about the fallacy of automatically not attending a concert by one of rock’s elder statesmen by making the assumption that it would suck. Last night was a prime example of this fallacy, as Graham Nash put on an intimate, up-close-and-personal review of his career from the Hollies to the present day in a funky old movie theater converted to a concert hall. Having turned 74 just a few days prior, Nash appeared on stage looking and sounding great. I had seen Crosby, Stills and Nash on TV a couple of years ago, their singing was awful, but last night’s show proved that the problem does not lie with Graham Nash.

Opening with the Hollies classic “Bus Stop”, Nash and guitarist/singer Shane Fontayne (who also tours with CSN) proceeded to regale the grey-haired crowd with intimate, yet surprisingly full for only two musicians, renditions of songs from Nash’s solo career, as well as his on-again, off-again reunions with CSN and CSNY. Fontayne is a brilliant electric guitarist, able to evoke whatever sound is required by a song, after “Wind on the Water” Nash asked “doesn’t he sound just like a whale” which he did indeed.

As any seasoned concert-goer knows, when an artist  well past his heyday says “here’s one from our new album” there is usually a stampede to the restroom and/or beer stand, however in Nash’s case, the audience listed attentively and responded enthusiastically to the new songs. The poignant “Golden Days” from his forthcoming album This Path Tonight included the line “what ever happened to all you need is love” which drew a cheer from the crowd.

Nash introduced several songs with the stories of how they came to be, the most interesting of these being his tale of the origins of “Cathedral”. It seems on his birthday, he procured a 1928 Rolls Royce, as well as a driver, and proceeded to take some LSD, lie on the grass in the center of Stonehenge, and then walk into Winchester Cathedral. While inside, he said he had a funny feeling in his legs, and looked down to see his was standing on the gravestone of a soldier who had died on that very day, his birthday, in 1799. I had always wondered as to the meaning of the lyrics to that song, as it turns out, he was quite literally “flying in Winchester Cathedral”.

Musically, highlights included rocking renditions of his solo hits “Immigration Man” and “Chicago”, the aforementioned “Cathedral”, and, of course, audience sing-alongs on “Our House” and the last song of the night, “Teach Your Children”. After taking the stage for their encore, Nash said “Shane and I warm up our voices before shows by singing Beatles tunes, so here you go” and they proceeded with a very nice rendition of “Blackbird” with Fontayne on lead vocals and acoustic guitar, and Nash harmonizing.

My article of two years ago was inspired by a performance by the then 80-year-old John Mayall, ironically, last night one of the posters for an upcoming show at the venue was advertising none other than John Mayall. I leave you then with this thought – there’s no substitute for experience.