You are here: Home / Sports / Baseball / Hero & Zero of the Week 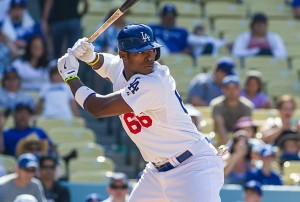 FORMER NBAer Chuck Person, on his shot selection: “When I step into the building, you’ve got to get me the ball. When I step off the bus, I’m open.” Reminds me of when Serge Zwikker fired up a 20 footer, which missed badly. Dean Smith told him, ‘There is a reason you’re open.’

For the HERO of the Week, how about Dodgers Yasiel Puig and Don Mattingly. Mattingly was nearly fired as Manager a couple of months ago, now they’re on an astounding 40-8 run, by far the hottest team in the Majors. MANY years ago, Mattingly played in Greensboro, then of course was a great player for the Yankees. NOT coincidentally, their good play started about the same time Puig entered the lineup. While a big aggressive at times, he’s playing great on offense AND defense, and has energized the entire team. We don’t know if Puig and/or the Dodgers can keep this up for an entire season, but they’re almost a lock for the playoffs.

For the ZERO, we’ll go with LSU Coach Les Miles. In a move that better than anything shows the ‘win at all costs’ attitude in the SEC, Miles had a player arrested, while already on probation, but had the team VOTE on whether to suspend him. Jerome Hill was already on probation for Statutory Rape, and was then arrested for assault, punching a man outside of a bar. Usually in these cases the SEC will really come down on the player, suspending him for their opening game, usually against La. Tech or Northern Vermont State or someone like that. But since LSU plays TCU in their first game, Miles handled it differently. Compare that with UNC having players miss 6-8 games, for the horrible offense of sleeping on a friend’s sofa, or calling a tutor after Class hours, and we see why the NCAA, (last week’s ZERO), is becoming more and more of a joke every day.