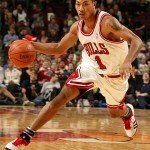 Bryant, who joins Hall of Famer Bob Pettit (1956, 1958, 1959 and 1962) as the only four-time All-Star Game MVPs in NBA history, is joined in the Western Conference starting backcourt by the Los Angeles Clippers’ Chris Paul (1,138,743). The Oklahoma City Thunder’s Kevin Durant (1,345,566) and the Clippers’ Blake Griffin (876,451), making his first All-Star Game start, are the starting forwards. The Lakers’ Andrew Bynum, a first-time All-Star, gets the nod at center (1,051,945). This marks the first time since 1997 (Houston’s Hakeem Olajuwon and Charles Barkley, and Seattle’s Shawn Kemp and Gary Payton) that two pair of teammates have been voted to start for one conference.