You are here: Home / Archives for Derrick Rose

As the Bulls hear into a new season, they truly are looking for a "fresh start." With the hiring of a new coach in Fred Hoiberg and the return of healthier versions of Taj Gibson, Derrick Rose (in a couple weeks), and Joakim Noah, the club hopes to forget their playoff woes brought to them from that … END_OF_DOCUMENT_TOKEN_TO_BE_REPLACED

on the Weekend Sports Report with Packer Dave and Steve Leventhal ...Jeff Rich joins us to break down how the Cleveland Cavs were able to eliminate the Chicago Bulls in game 6 at the United Center. John Poulter previews the Blackhawks - Ducks and Rangers-Tampa Bay NHL conference finals. He also offers his thoughts on the American League East and NL Central races at this … END_OF_DOCUMENT_TOKEN_TO_BE_REPLACED 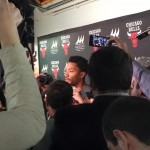 For the first time since having arthroscopic knee surgery back on February 27th, Bulls guard Derrick Rose spoke to the media on Monday night before the team hosted the Memphis Grizzlies at the United Center. While the former MVP would not give a definite return date, he did keep hopes of returning before the playoffs alive. “I know something positive is going to come out … END_OF_DOCUMENT_TOKEN_TO_BE_REPLACED

“Next man up” has become the slogan for the Chicago Bulls for about three years now. Ever since Derrick Rose tore his ACL in the 2012 playoffs, head coach Tom Thibodeau has been forced to change his lineup more than any other coach in recent memory. Not only have the Bulls had to deal with injuries to Rose the past few seasons, Joakim Noah, Taj Gibson, and Kirk Hinrich are … END_OF_DOCUMENT_TOKEN_TO_BE_REPLACED

Derrick Rose came ready to play on Thursday night and prove to the national audience watching on television that he is still one of the best point guards in the league. Entering Thursdays matchup against the San Antonio Spurs Rose had averaged 24.0 ppg on .484 shooting in his previous six games. The Bulls on the other hand were not playing so hot-losing six of their last … END_OF_DOCUMENT_TOKEN_TO_BE_REPLACED