You are here: Home / Sports / Baseball / Indescribable and Impossible: Cubs in the Playoffs

Indescribable and Impossible: Cubs in the Playoffs: 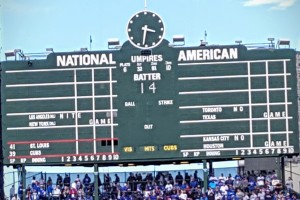 When you sit in the Chicago Cubs press conference room following a game, you can hear a whole host of different sounds.  You can tell when a faucet is turned on somewhere, as the pipes whistle, when the only air conditioning in the entire stadium is turned on, and when Kris Bryant hits a walk-off home run, you can not only hear, but feel the hundred year-old stadium brace under the pressure of 40-thousand-something fans vibrating with delight.  I’ve felt that.  I’ve felt the pure delight Chicagoans young and old have exuded with in response to the fact that for once, it feels like, for once, their team is freakin fun to watch.  For once!  For once, in the bottom of the ninth, the benefit of walking six blocks to their car to beat only about half of the traffic, doesn’t outweigh seeing what Addison Russell or Kyle Schwarber or Jorge Soler might do to try and win them a game.  I’ve been there, I’ve seen it.  I’ve also seen what it has been like for old farts who have bought season tickets, grumpily, year after year, decade after decade, only to see 50 or 60 or 70-win seasons, who threaten every year to sell them.  I have seen those same loyal, grumpy old men this past year religiously check ESPN, fiddling with their phones, to check the scores and standings of a team littered with 20-somethings who nothing of that pain of a Cubs fan. Those same old, jaded, embittered men who by August in the seasons past, whispered, “the Cubs suck,” to themselves and their daughters after series of disappointing and embarrassing losses.  I’ve seen all that.  You’ve seen all that.  But what I’ve never seen, and what I am still trying to convince myself actually occurred is what the Cubs did last Tuesday, what happened last Tuesday.

Now the Wild Card game wasn’t that surprising.  Jake Arrieta was Jake Arrieta.  Not that it’s not incredible, not that it’s not amazing what he has been doing, but by now, people are simply expecting incredible out of him, fair or otherwise.  Clark street filled with people, the bars loved it, playing walk-up songs, blowing the horn, popping champagne.  But again, that was mostly Jake Arrieta.  It was surprising that Schwarber and Fowler were the sources of offense, and not the de facto “faces of the franchise” Rizzo and Bryant, but all in all that win went to Arrieta.  And we’ve seen Clark street a mess with the Hawks fans before, Bulls fans, and all sorts of other viewers of big Chicago evenings and events, so it wasn’t all that different.

In terms of optics, Tuesday, wasn’t discernable from the previous Wednesday, when the Cubs took down the second best team in baseball.  But in terms of feel, the two were a world apart.

Regardless of your sentiment for the Cubs, if you are a fan of sports, the momentousness of this feat is something downright fun to watch.  The loveable loser, the baby brother not capable of anything, slayed the dragon.  A bunch 20-somethings who knew and know no better exercised the demons of those loyal to the Cubbie blue.

It was as if someone was directing the whole thing.  The white W towels were distributed as fans walked in the gates.  Stars like Kerry Wood, Billy Williams, John Cusack, Eddie Vedder, Rob Manfred, and even Ron Santo, Ernie Banks, Harry Caray (in spirit) were all in attendance, looking on with as much enthusiasm as the school teacher next to them.  Fans’ stomachs both fluttered with excitement and flipped with dread-filled anticipation.  Tears leaked from the eyes of men who’ve only cried once or twice in their lifetimes.  And children sat and bounced with excitement, not fully understanding what they were witnessing.  Upon seeing Hammel give up two runs in the first, few were discouraged.  It wasn’t unlike Hammel to do such a thing. The Cubs have an unfortunate penchant for giving up early runs.  He made up for it when Maddon made the surprising decision to keep him in to bat in the bottom of the second.  Driving in Starlin Castro with a single, Hammel himself eventually scored along with Kyle Schwarber off of a three-run, first pitch homer from Javier Baez.  As the lead swung from favoring the Cards by two to the Cubs by two, off a shot from the rookie everyone expected one from sooner or later, towels were whipped so hard, half the fans probably lost them.  As gladly as Cubs fans cheered when they scored, the equally happily jeered when the ump asked for the ball back from John Lackey, as it was the second time in the postseason that there had been questions about him doctoring the ball.  “Lack-ey, Lack-ey, Lack-ey” chants rang through the stadium.  After taking out the incredibly frustrated Hammel, Travis Wood eventually came in and later gave up the lead, few breaths were held. And rightly so.  The following inning, Anthony Rizzo clocked one, giving the Cubs the go-ahead run.  Even with all the back and forth, the loudest shot was yet to come.  Leaning back in his armchair, bobbing to a rest in his stance staring right field and Kevin Siegrist down, Kyle Schwarber squared up and smacked the ball straight out of the park with a “clock” like the sound made when a driver meets a golf ball. Gaping silence, and then a volcanic eruption of noise followed.  In the manner in which legends, myths, and lore are composed, the homerun ball wasn’t discovered until the following day, when a Cubs employee was sent to retrieve it.  Upon finding it atop the new right field scoreboard, the Cubs decided to put it on a pedestal, encase it plexiglass and leave it there throughout the postseason.  Upon Rondon recording the final out, the home Wrigley crowd, for the first time, celebrated at home.  The street was absolutely filled with Cubs fans outside the stadium, on Clark street, as the few Cardinals fans in the stadium covered their red with their coats swiftly and quietly excused themselves.  The electric awe that gently reverberated following the win throughout the stadium, and throughout all of Wrigleyville, as the team celebrated, their families came on the field, and fans stood around, unwilling to stop basking in the possibility that what had just happened was real.  Chicago was soaked in it. 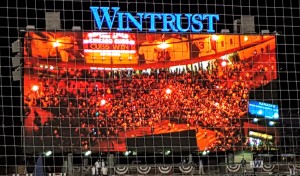 Fans congregating outside Wrigley Field following their victory over the St. Louis Cardinals

And ever since, in the week following, that is all that Cubs fans have known.  #WeAreGood, the Cubs are even telling themselves.  They too, are realizing that, convincing themselves that indeed, it might be possible, that they are good.  The team with one of the best batting averages in the majors with runners in scoring position, the team feels nothing but clutch in big-time situations.  It feels as though the Cubs are almost destined, have no possibility except the impossible, to win, for it feels that is all they know right now is to win.

As Joe Maddon put it, “Everything came together at the right time-it’s indescribable.” Every Cubs fan hopes and impossibly believes that perhaps, this time, for once, everything will come together, and it will be beyond indescribable.