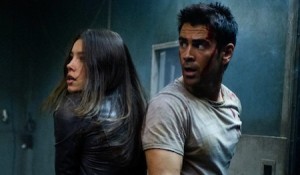 Many of you know this is a reboot of the 1990 film starring Arnold Schwarzenegger and Sharon Stone.  That movie is loosely based on a short story by sci-fi writer Philip K. Dick called “We Can Remember It For You Wholesale.”

I’m not sure why some critics have thumbed their noses at the 2012 version with Colin Farrell, Kate Beckinsdale, and Jessica Biel.  Bryan Cranston plays the role of Cohaagen, although not quite as fiendishly as Ronny Cox in the first movie.

Most of the plot points are the same, even if this film doesn’t have the Mars portion of the plot. The next four paragraphs have plot details, so feel free to skip to the bottom for my take of the 2012 edition of Recall.

Like the first movie, Qauid has nagging dreams of a mysterious rebel spy.  He goes to Rekall, a club that specializes in implanting dreams and fantasies in your brain, to spruce up his mundane life.  Same as before, all hell breaks loose, he kills a bunch of people, and then our hero is on the run, trying to figure out who he really is.

There are several nods to the first movie, such as the prostitute with the three breasts, and it certainly helps knowing the plot, because the action moves at warp speed.

The main difference of course, is that there are no Martians.  In this case, the rebels live in “The Colony” on the Australian continent.  Their enemy is the United Federation of Britain, which is the only other habitable part of the planet, and is led by Cohaagen.  The two worlds are connected by a giant gravity elevator that passes through the Earth’s core.  The visual effects alone of the “Fall” as the vehicle is called, makes this worth watching. The “UFB” has a stranglehold on the colonists, exploiting their resources and population for low cost labor.

Quaid has left himself several clues and hidden messages as to his “real” identity, or so he thinks.  There are several instances where he has figure out, what is real, and what is a “dream.”

The action is non-stop, and already knowing the characters, made it fun.  No setup, just some incredible chase scenes, that although they are mostly GCI, it was incredible to see the imagination of the director and writers.  The car chase is one of the best ever, be it real or computer generated.

I was on the edge of my seat, and I pretty much knew what was going to happen.  There were still a few surprises.  The girl on girl fighting was excellent.

It was fun, entertaining, and great special effects.  My rating – a triple – three stars.