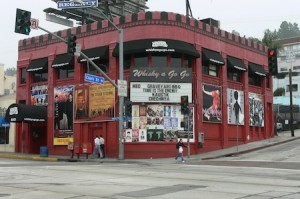 Prior to my trip out to Los Angeles last week, I checked to see if any good bands were playing in the area. The goal was to extricate my son away from the USC campus to experience some of the local music scene. Not that he couldn’t venture out to Hollywood or Venice, but with no car, he’s limited to public transit.

As luck would have it, the Sunset Strip Music Festival was taking place in West Hollywood, and I was able to get some tickets through the press office.

So here’s my take on the event, and several groups that made an impression on me.

Seventy-one different acts graced the three stages and three venues along the fabled Sunset Strip, just below the Hollywood Hills. The clubs included the Key Club (as well as their downstairs room, the Plush Lounge,) the Roxy, and the Whisky A Go-Go. The renowned Whisky was home of many famous bands of yesteryear, including the Buffalo Springfield, the Byrds, Alice Cooper, and most notably, The Doors. Wikipedia states that it also served as the first LA headline club for many British acts including The Kinks, Cream, Roxy Music, and Led Zeppelin.

The Whisky didn’t seem all that large, but my research seems to indicate the capacity is 1000, which would make it slightly larger than the Park West in Chicago. I guess the upstairs is larger than it seems.

It is certainly a daunting task to figure out which acts to try and see. Then e-mail came to the rescue. We got onto the press list for the event, and a few days prior, the press releases began to trickle in. Of the dozen or so emails that arrived complete with YouTube and MySpace links, one caught our eye, that for Terraplane Sun, a five piece pysch-blues band from Venice.

They were scheduled to appear at four in the afternoon at The Roxy, so we left an hour before their appearance. Between traffic, walking the six blocks from the parking deck, and picking up our wristbands, we caught the last half of their set. Most of the bands were given thirty-minute slots.

Despite only seeing an abbreviated portion of their performance, it was enough to reinforce what I’d seen on the video. Terraplane Sun were sonically sound, tightly arranged, with a terrific on stage presence, as well as good chemistry with the audience. As it turned out, they would the best, most polished of the small venue acts we would see all day.

I was able to catch up with the band and their managers after the brief set. That was another thing I liked, the professionalism of the group. I’ll always remember what Chris Blackwell told me about signing U2. He noted that not only did they play their butts off regardless of the size of the audience, but also had a professional manager that was not “one of their mates who couldn’t play any instrument.”

Information gleaned from their management (and the web site) was that the band has been playing up and down the West Coast, plus stints in Las Vegas and at SXSW. In fact, their music has made appearances in television shows such as “Nurse Jackie,” “Damages,” and one of my personal favorites, “Franklin & Bash.”

This group is definitely going places. I’m surprised they haven’t made the late night talk shows as a musical guest, but it’s probably a matter of time. I’m certainly looking forward to seeing them here in the Midwest someday soon. 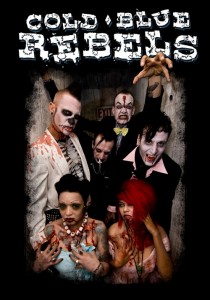 After the Roxy, we ventured over to the Key Club where we saw some less than memorable groups including a five piece all Asian girl combo. For the record, their name was Nylon Pink. About an hour later we ended up at the fabled Whisky, where we experienced the most intriguing group of the day.

Cold Blue Rebels were a punked out outfit, dressed like zombies, and playing hard rockabilly with “horror movie lyrics.” The bassist had an upright bass, which appeared to have been dipped in metallic blue paint from top to bottom. They even had to zombie girls as go-go dancers. They were absolutely one of the most entertaining acts we saw. They have quite a pedigree. Vocalist Mickey Finn hails from Jetboy, a group that goes back to the LA punk scene of the ‘80s, Joe Normal (guitar) and Danny Dangerous (bass) were members of the Zeroes, from the same punk circles.

It was great schtick, and I mentioned it to Finn after the show, upstairs where he and others from their entourage were greeting fans and selling their merchandise. “I’m glad you get it,” he noted, “not everyone does.” Not only did I get it, I complemented him on the stage act, and how entertaining their set was. Their timing couldn’t be better, with the preponderance of zombie and apocalyptic fare on television and in the movies.

Stick with this one all the way through the song.

The next performer to take the stage was none other than Leif Garrett. Yup, the former teen idol is now a middle aged man and fronts a rock band. He looks and dresses a lot like Nils Lofgren did in his ‘80’s days as a member of the E Street Band, complete with bandana. His performance did nothing for us, so we split.

In our meanderings around the three-block area containing the festival, we found a spot near the VIP section (but not in it) where we could watch Bad Religion’s set on the main stage. Fortunately, we were to the right of the throng. Technically it was a walk through area, but we weren’t hassled by security, and were able to witness a good portion of the LA punkers’ hour-long set.

By then, we were tired from the ninety-degree heat and several hours of standing. At least I, as a middle-aged rock fan was feeling my age, and wanted a place to chill for a while. The Plush Lounge below the Key Club provided a good sitting place, with a row of padded sets on a riser at the back of the small room. It appeared to hold maybe 100 or 125 people, but there were only about 50 or so fans present.

There was another man there about my age, who seemed to be half listening to Lit Soul, the band playing when we arrived. However, when the next act came on to play, he sprung to life. It turns out his two sons were members of Holding Harlot, the act that followed. Jon Gass is a Grammy nominated, multi-platimum engineer, so as someone who spent a lot of time in radio studio, I could relate, we did the best we could to converse, given the surroundings and the loud music being played.

Holding Hartlot was the third band that I liked a lot. Their alt-indie-rock music is made up of catchy guitar hooks, harmonies, and as they state on their Facebook page, “identifiable lyrics.” Those were tough to decipher. It wasn’t their fault. The poor sound man had to do a presto-change-o every half hour for the ten different acts scheduled to play the Plush.

What engaged me about this quartet, was the energy and the vibe coming off the band. Everyone in the room was bouncing along with 24 year-old Jesse Gass (rhythym guitar/vocals) and his 19 year-old brother J’aime (lead guitar.) They are augmented by long time friends Michael Lopez on drums and Clarence Williams on bass.

They were raw, very raw, but you could already see the beginnings of band chemistry, and stage charisma. Holding Harlot has a huge upside. Their cover of “People are Strange” was electric, and impressive since they don’t have a keyboard player. Goss, the father, said they learned the song a week prior. Honoring the Doors was the theme of the weekend. Some bands participated in the tribute. Terraplane Sun, for example, performed “The End.”

The Gass family probably wouldn’t want to hear it, but the only thing their foursome needs is a true vocalist. Maybe it was the mix, but it just seemed that with a full on vocalist, male or female, the boys’ backup harmonies would serve them well at the next level, if they are in fact serious about making it in the music business.

After wandering about a while longer, we picked up dinner from a food truck, and left the area six hours after we arrived. During a pit stop at Ameoba Records further east on Sunset, I did some speed shopping, and picked up some imported sixties compilations of psychedelic nuggets to augment the station’s collection.

I had so much fun at SSMF, I hope to return next year, and perhaps catch more days and more music.