You are here: Home / Sports / NBA / Rose Remains Hopeful for Return This Season 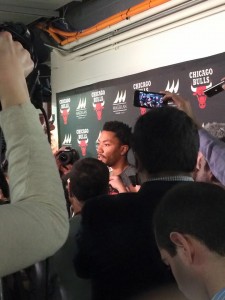 For the first time since having arthroscopic knee surgery back on February 27th, Bulls guard Derrick Rose spoke to the media on Monday night before the team hosted the Memphis Grizzlies at the United Center.

While the former MVP would not give a definite return date, he did keep hopes of returning before the playoffs alive.

“I know something positive is going to come out of this.” Rose told reporters. “Whenever I come back, I come back. The way I feel right now, there’s a good chance I come back this season.”

Rose, was averaging 18.4 points and 5.0 assists in 46 games this season before an MRI revealed he had once again tore his medial meniscus in the right knee. Rose missed all but 10 games last season after having the meniscus reattached rather than having it removed. This time around team physician Brian Cole removed the damaged part of the meniscus rather than repairing it again, meaning the rehab was originally supposed to only be 4-6 weeks.

Rose said he didn’t know when the injury occurred, but cited the Golden State game on January 27th as a possibility for when he tore the meniscus.

Rose remained positive even when answering tough questions regarding his future, including his thoughts on the possibility of the team being finished building around him as their star.

“Its to each his own.”- Rose said. “If they feel like they need to do that, this is a business too. I know the business side.” “I know they would be making a totally wrong mistake but I am not the owner, I’m not the GM or the president.”