You are here: Home / Music / Be Bop / Song of the Day by Eric Berman – “Footprints” by Miles Davis Quintet 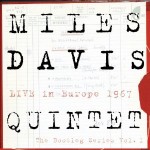 They were known as Miles Davis’ second great quintet featuring Herbie Hancock on piano, Ron Carter on bass, Wayne Shorter on sax and Tony Williams on drums, but to some, they were his most important lineup. It was here that Miles was surrounded by a talented group of musicians who were much younger than he was.

The first great quintet featured John Coltrane on sax, Philly Joe Jones on drums, Red Garland on piano and Paul Chambers on bass and were responsible for creating a new modal language of cool Jazz on quintessential classic albums like Kind Of Blue, Round About Midnight and Milestones.

The ’60s quintet’s approach to improvisation was far more free-wheeling and the group’s musical language was far more advanced…they were all on the same plane, and that plane was otherworldly.

This quintet were responsible for classic albums like E.S.P., Miles Smiles, Sorcerer, Nefertiti, Miles In The Sky and Filles de Kilimanjaro which were recorded between the years 1965 and 1968, and can be heard live from the concert stage on the 5 CD Complete Live At The Plugged Nickel recorded in 1965 and on the 3 CD Live In Europe 1967 where today’s Song of the Day by Eric Berman was culled.

This version of Shorter’s “Footprints,” originally from the Miles Smiles album, but is heard and seen here from the DVD that came with the Live In Europe 1967 set which was the first volume of the ongoing The Bootleg Series. So far, there have been three volumes in the series…let’s hope Columbia will keep them coming.