You are here: Home / Music / Folk / Song Of The Day by Eric Berman – “Cops Of The World” by Phil Ochs 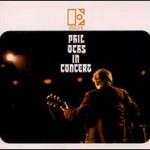 The cops have had always had their hands full with  crowd control for whatever reason, though it’s usually for political protests these days. Too often, the police handled it by using their heads first and then their force. This song comes from an era when cops were considered pigs, and in some cities…in some circumstances, they still are. Phil Ochs had his fair share of run-ins with the police and was even arrested here in Chicago during the 1968 Democratic Convention. This song was recorded in 1966 on his album “Phil Ochs In Concert.” While most of the album was recorded at concerts in Boston and New York City in 1965, some of the tracks are studio recordings with the audience dubbed in.