You are here: Home / Music / Song Of The Day by Eric Berman – “Disparate Youth” by Santigold 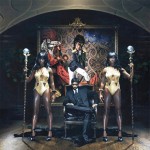 American born Santi White got her start as an A&R rep for Epic Records before joining the band Stiffed who released two punk rock records in the early two-thousands. In 2008 she went solo in a new direction as a singer, songwriter and dance music maven and scored with the hit “Creator” from her self-titled debut album. Many months touring supporting acts like Kanye West, Jay-Z, Bjork and M.I.A. led her to an afternoon Lollapalooza slot in 2009 where I caught her act and realized that she was much more than a product of some record company boardroom. Turns out she’s quite the performer who writes most of her material and seldom needs to lean on auto-tune to make her voice sound good. Several weeks ago she released her sophomore album “Master Of My Make Believe” with an assist from Karen O and Nick Zinner of Yeah Yeah Yeahs to much critical acclaim. She will again be featured at this year’s Lollapalooza Festival.