You are here: Home / Music / Song Of The Day by Eric Berman – “In Dreams” by Roy Orbison 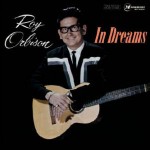 Some songs are forever changed by the movies that they appear in. For instance, one can’t help but feel the pain and helplessness of the police torture scene in the film “Reservoir Dogs” when listening to the Stealers Wheel hit “Stuck In The Middle With You.” Roy Orbison’s rather innocuous “In Dreams” also took on a more sinister tone when it was used by David Lynch in the film “Blue Velvet” forever changing the hue of the song for all of those who saw the movie. That said, one can’t deny the majestic beauty of this Roy Orbison classic. I was fortunate enough to see him in the late ’80s in concert and he had one of the most amazing operatic baritones capable of soaring over several octaves right up to the end of his life. What other songs have been changed for you by their use in the movies or on TV?