You are here: Home / Music / Alternative / Song Of The Day by Eric Berman – “Mean Man” by Detroit Cobras 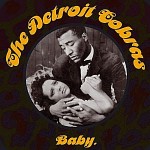 You can draw a sonic line between The Bangles and Detroit Cobras when it comes to influences. Both groups draw upon the classic girl group sound of the 1960s, but add their own garage rock spin to the proceedings. Detroit Cobras are a garage rock band from, you guessed it, Detroit whose first few albums were comprised exclusively of covers. The band has had a revolving lineup over the years with Rachel Nagy and Mary Ramirez (on vocals and guitar respectively) the only two constants. This live cover of Betty Harris’ 1968 soul gem was originally from the Cobras’ 2005 album called “Baby.”